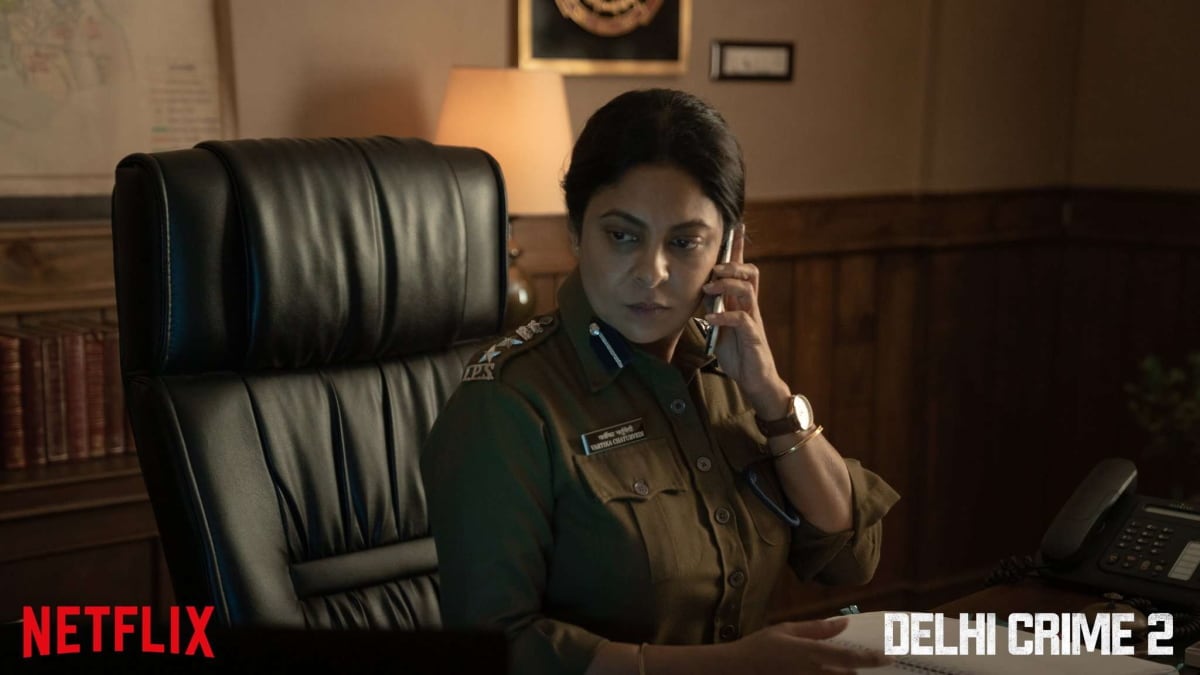 Delhi Crime season 2 — out Friday on Netflix — sees Shefali Shah returning on-field as the DCP of an understaffed Delhi police force. Fresh off solving the 2012 Nirbhaya rape case in the first season, DCP Vartika Chaturvedi and her team are back to investigate a fictionalised account of the kachcha-baniyan gangs. The Delhi Crime season 2 story — inspired by real-life events in Northern India — follows an oily group of killers who target the homes of vulnerable senior citizens. To recall, Delhi Crime season 1 received an International Emmy award for Outstanding Drama Series, becoming the first-ever Indian show to achieve the feat.

However, this new chapter is not conceived by creator Richie Mehta, who wrote and directed the first season of the show to its global fame. With Delhi Crime season 2, Netflix has passed on the torch to Tanuj Chopra (Punching at the Sun), who directs from a screenplay that has six contributors. “The one thing I’ve learned about Delhi Crime is the amount of research that goes into crafting the show. Not all of it shows up on the screen in hard and fast details but it’s the foundation on which we build our narrative,” Chopra said in a prepared statement.

While audiences came for a dramatised rendition of the harrowing case, Chopra believes that they eventually ended up falling in love with the characters. This is something he wants to expand upon in Delhi Crime season 2, as we dive further into the protagonists’ personalities and their growth since the last chapter. The Delhi Crime season 2 trailers also hint toward some socio-political commentary, revolving around the class divide in society — or simply put, the ongoing struggle of the elite versus the poor. DCP Chaturvedi even notes this divide as a cause for the high crime rates in the city, as cases keep piling up before there’s even time to solve one.

Delhi Crime Season 2 to House of the Dragon, the Biggest Web Series in August

As stated earlier, we are dealing with the kachcha-baniyan gangs on Delhi Crime season 2, who terrorised the homes of senior citizens in Delhi in the middle of the night. Their modus operandi involved breaking and entering rich households, and murdering the residents if they failed to comply. What’s interesting is that all members of the gang would be dressed in their underclothes — thus the affiliation name — and lather their bodies with oil, making it difficult to grasp them during a chase. Delhi Crime season 2 chronicles the police investigation surrounding these attacks, albeit in a fictionalised manner.

With that, here is everything you need to know about Delhi Crime season 2.

Those interested will be required to have a subscription plan, starting at Rs. 149 for mobile and Rs. 199 for the basic plan, which lets you stream on a TV or laptop but only in SD resolution.

Just like the first season, Delhi Crime season 2 is expected to release in Hindi, with dubs in English, Telegu, and Tamil dubs — though there’s no official word from Netflix as yet.

Delhi Crime season 2 will comprise five episodes, with each of them expected to run from 45–60 minutes. The first season had seven episodes, chronicling the shocking gang rape case from 2012. With Mehta being pushed to the sidelines as a creator, this new chapter will be directed by Rajesh Mapuskar and Tanuj Chopra.

Since this chapter serves as a sequel, fans will see a lot of faces from the previous season. Following the global success of Darlings earlier this month, Shah is back on screen in Delhi Crime season 2, reprising her role as DCP Chaturvedi of the south district in Delhi. Spearheading investigation into the kachcha-baniyan gangs, she struggles to keep up with high expectations, as residents start protesting against the incompetence of her police force.

Delhi Crime season 2 also sheds light on the morality aspect of a cop, with Chaturvedi taking pity on the mistreatment of the underprivileged suspects. “In the first season, there was no wavering of moral compass,” Shah said in an interview, detailing her character development. “It was very straight. Vartika felt anger, frustration and pain, but now even though there is evidence pointing in a certain direction and there is a procedure she must follow, her instinct protests.”

Meanwhile, Neeti Singh, played by Rasika Dugal, has been promoted from a trainee to an ACP, following the triumphant victory three years ago in the Nirbhaya case. The character has matured into an officer with authority, though she still needs help with her anger issues. “In Delhi Crime season 1, I shadowed a lady cop who was also a probationer,” Dugal said in an interview. “So, when shooting for season 2 was about to begin, I got in touch with her, and she told me that she had been promoted to ACP and was posted in Chandigarh.” Dugal shadowed her again and spent over a week in the office to prepare for the role.

Adil Hussain is billed third on the list as Police Commissioner Kumar Vijay, who at all times looms over Chaturvedi’s head to get a crack on the case. Serving as a senior officer also means protecting those under you, and judging by the Delhi Crime season 2 trailers, it seems Vijay is at his utmost limit, losing patience and confidence in his team with each growing murder in the district.

Darlings, Delhi Crime Season 2, and More on Netflix in August

Rajesh Tailang (Mirzapur) returns as Inspector Bhupendra Singh on Delhi Crime season 2, working directly under Chaturvedi and acting as an emotional support in dire times. As a character, he has lost all hope in the city of Delhi and has got habitual to the increase in crime rate over time. “I live in Delhi. So, whether it is the Nirbhaya case or any other incident, as an actor, it gives me an extra trigger. References from real life and personal experiences help me with performing,” Tailang noted in an interview.

Denzil Smith — known for Tenet and The Lunchbox — returns as Vishal Chaturvedi. As husband to Vartika, he adds that extra touch of family drama and support, when residents in their apartment complex start firing low-level employees in fear of getting murdered on Delhi Crime season 2.

Here’s the official synopsis for Delhi Crime season 2 from Netflix:

After a violent quadruple murder stokes public fear and escalates New Delhi’s class divide, DCP Vartika and her team race to find the killers before they attack the city’s vulnerable senior citizens again.

This time around, in season 2, the Delhi Police will be seen investigating a multiple murder case involving senior citizens, led by their very own ‘Madam Sir’. While all the evidence points squarely towards the return of the gruesome kachcha-baniyan gang escalating public fear, Madam Sir and her team will be seen delving deeper to solve the case and uncover the truth.

Indian Predator: The Diary of a Serial Killer Release Date Set for September 7 on Netflix

Netflix dropped the official teaser for Delhi Crime season 2 on July 22, setting the tone for the upcoming series, as Shah’s voiceover details the difference between the rich and the poor. Plot details were kept in the dark, with the main focus being shed on the general crime rate and how it affects the police and the citizens of Delhi’s south district. At the time, Netflix also announced the release date for the second season of the series — August 26.

On August 8, Netflix released a full-length trailer for Delhi Crime season 2 — this time, focussing more on the crimes and the modus operandi. The murders create a state-wide panic, causing many of the “rich folk” to fire low-level employees such as security guards and cleaners, setting off a trend of social boycott. Chaturvedi also blames the societal system for the high crime rate, stating, “There are no born criminals.”

At the time of publishing, there’s no word on when the first reviews are expected. Going by earlier Netflix Indian originals, reviews are usually embargoed until the time of release.

Here’s the official poster for Delhi Crime season 2 from Netflix: