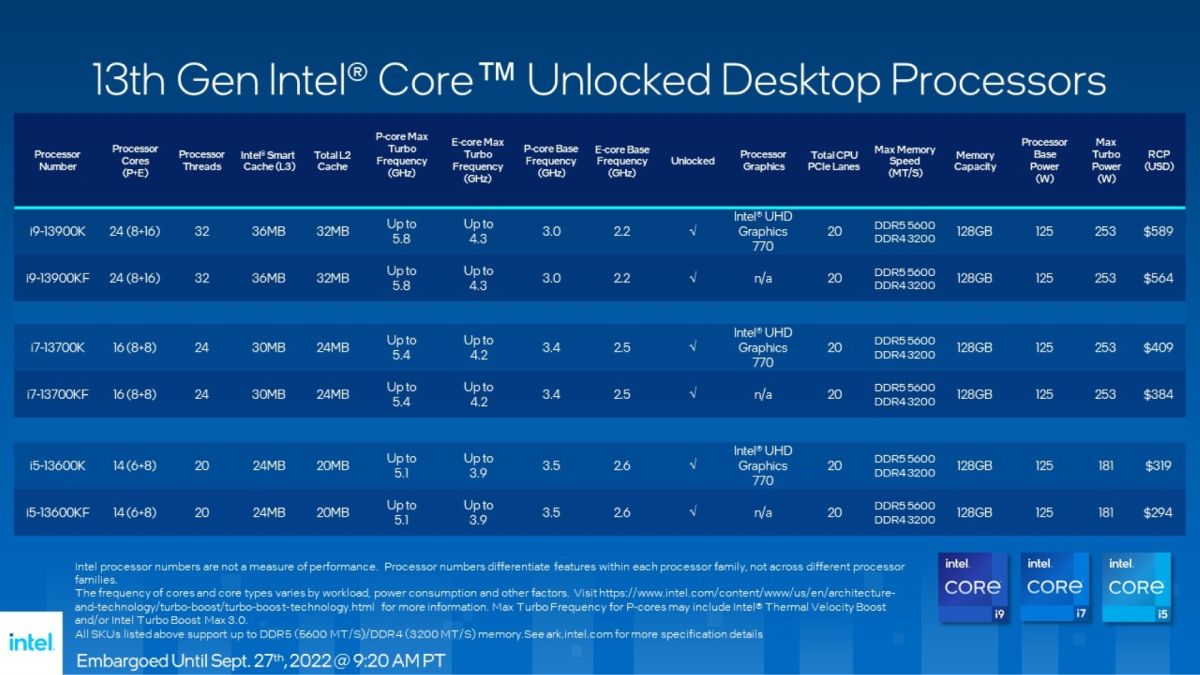 
Intel recently launched the first CPUs in its 13th Gen Core family. The company has started with high-end, overclockable desktop CPUs aimed at gamers and enthusiasts, with the new Core i9-13900K at the very top. Last year, the company made a huge change, introducing its first ever heterogenous Hybrid Architecture combining the expected high-performance cores with a large number of smaller, more power-efficient ones. This delivered a significant jump in performance for multi-threaded workloads and situations with multiple programs running simultaneously.

With the 13th Gen, codenamed Raptor Lake, Intel has continued this and in fact bumped up the number of E-cores. Other improvements include higher clock speeds and an improved cache architecture. Already, new overclocking records have been set by professionals.

Gadgets 360 had the chance to talk to some of Intel’s senior managers at the time of the 13th Gen launch in India, including Gokul V Subramaniam, Vice President, Client Computing Group and GM Client Platform & Systems. Here’s what he said about Intel’s design philosophy, what users want, and the balance of power and performance.

The lineup of 13th Gen CPUs launched so far, all of which are aimed at enthusiasts and gamers

Gadgets 360: Let me start off by talking about India, as we are coming out of the pandemic. There was surprising growth in PC sales, but products were often out of stock and prices were all over the place. How is the market doing now?

Gokul V Subramaniam: The pandemic really showed us the importance of the PC and what it means for users. We’ve seen personal computing come to the forefront, be it to work from home, for schooling, healthcare, you name it. That was really critical for us. It may have had some ups and downs, but the value of PCs has really gone up.

Gadgets 360: Considering how many years it takes to develop a CPU, did the 13th Gen begin to take shape during the pandemic? Was there anything that changed about the way it was developed or what went into the final product ?

Gokul V Subramaniam: That’s an interesting and tricky question. I can’t tell you when. What I can tell you is Hybrid Architecture started with the 12th Gen and we’ve continued to build improvements and capabilities. That’s what the 13th Gen is all about. There are a number of things that we have done – increasing the number of E-cores, adding more cache, bringing platform features, finding ways to improve our tools for overclocking and memory overclocking, improving thermal headroom. We built all of this as an evolution, and the journey continues. So that in that sense, that’s how the 13 Gen development journey has been.

Gadgets 360: What do you think is driving the upgrade cycle now, and has it lengthened or shortened, considering that Intel has kicked off the 13th Gen with CPUs targeted at enthusiasts?

Gokul V Subramaniam: I think performance is a big ask [from users]. Flexibility has been a big one. Availability, as in you launch and then it’s supplying and being able to get our customers to build products. And then of course compatibility. These were the big drivers for us to build the 13th Gen on.

Intel has used the same Gracemont E-core design that the 12th Gen had, but increased the number of them

Gadgets 360: Has anything changed with regard to your perspective on measuring performance? What are the use cases that matter most to the end users now?

Gokul V Subramaniam: That’s a great question. Let’s talk about Raptor Lake S and the 13th Gen family of products. We think it’s good to put performance in perspective with benchmarks and actual user workflows as well. We look at the content creators, and that includes game developers. It’s a combination of what the gaming and enthusiast community want. Are we giving that? What is an actual day in the life of a user, be it a creator or a gamer? And how is that really being optimised for in what we’re delivering? And then of course, what do benchmarks really show?

Gadgets 360: Especially now that Hybrid Architecture has come into play, is there anything that benchmarks don’t really tell the full story of?

Gokul V Subramaniam: Benchmarks never tell the full story! I think workflow is a good way to look at it. If I am a creator and I want edit video and use Photoshop, and I want to do a bunch of things in parallel, what does that workflow look like? And similarly for gamers.

Gadgets 360: When it comes to performance, now we’re seeing power requirements bumped up across the industry. Is this a question of really needing to push more power into a CPU to get this kind of result? Is there demand for that?

Gokul V Subramaniam: I think there is a clear power requirement for you to get to these performance [levels]. And then you can do things like get more efficient by having the Hybrid Architecture. So we can say, hey, rather than keep throwing in P cores, can I find a way to get the same performance that the user needs with more efficient cores? And can I do things like improving my cache so that I can [improve] performance? There are architectural implications rather than just keeping driving the power higher, because that is also going to have a sustainability aspect to it. So we look at the architecture holistically. And that’s why we do things that are fundamental like Hybrid Architecture and the Thread Director, to make sure we can deliver performance and really always cognizant of the power that’s needed.

Gadgets 360: Is that a shift in demand? There’s been a huge focus on power efficiency, especially because the market was shifting towards laptops. Have we now flip-flopped back to an absolute push for the maximum possible power?

Gokul V Subramaniam: No, we’ve always had a balance between performance and power in all our products and architectures. When we deliver the performance, we want to make sure we’re using the right power for it. A lot of the usage patterns and users are expecting what they see in a laptop on a desktop, in terms of power efficiency. But having said that, it’s a stationary device. There is no battery in it. But we always look at the form factor, and the need that it is fulfilling, and then make a balance decision between performance and power. I wouldn’t call it a flip flop or a sudden change, It’s always been a consideration. That’s why even in the 12th Gen there was Hybrid Architecture. We’re improving it in 13th Gen. it’s a technology journey that we are on.

Gadgets 360: The K-series models that have launched are aimed at enthusiasts, but I don’t suppose you could talk about the rest of the lineup? In terms of power targeting, where roughly 60-65W is the normal threshold for the desktop, is that is that going to scale as well?

Gokul V Subramaniam: I am not able to say that, but we try to cater to all user needs and what the customer wants, and that’s what will define what power we need to achieve that performance. We never say “This is the power we’re using, and we’ll make the performance tailored to that”. It’s a function of what the user wants, the workload, the workflow. Then we derive performance needs out of that, and then figure out the segments and segmentation.

Pro overclockers have already breached the 8.8GHz mark with a 13th Gen CPU

Gadgets 360: Speaking of the K SKUs, where is overclocking heading? Is there a greater appetite to experiment from the more casual, tentative user? Is there more demand for extreme fine tuning?

Gokul V Subramaniam: I think that’s interesting. We’re seeing enthusiasts wanting to overclock, so we’re trying to make sure that we give them the right tools. There is per-core tuning, but then you also want to have something like a one-click speed optimiser so that a beginner can safely and responsibly try it out, within and the boundaries of the system.

And there are things that are within the spec, like Thermal Velocity Boost and Adaptive Thermal Boost. These take into account the temperature, the thermal headroom, etc. These are tools that helps OEMs, our customers, build products that are within the spec. What kind of form factor are they, building, what are the temperature and power delivery that they need, what kind of frequency bump can they give and still have thermal headroom? And thereby when the end user gets it.

Gadgets 360: We see a significant bump up in the number of E-cores with this generation. How does Intel decide exactly what each segment requires and how do you balance the number of P cores versus E-cores for any given price level or segment?

Gokul V Subramaniam: What does the user want? What performance do they need? We take various attributes [into account] to design what we need to deliver. Do we increase the number of E-cores? Do we need P cores? And then we look at the power budget. So with this generation we found that with the same Skylake-level Efficiency cores, we can give more within the same power envelope, which is a better design. You’re power efficient, but you’re still able to achieve the performance that your workflows need, and that’s how we decide on where to put what and how many, and the Hybrid Architecture allows us to play with those kinds of things. We do all these simulations to arrive at the right design.

Gadgets 360: I’m sure that somewhere in some underground lab there’s a locked room with maybe a prototype chip that has only, say, 48 E-cores or something. Could something like that be done with the same die area and power draw? What’s stopping you from doing that?

Gokul V Subramaniam: We always do that.

Intel Communications: We build very open technologies. All the platforms, all the software development, everything is very open. We’re not using proprietary platforms. Our goal is that as an industry and for the consumer, whenever they buy our parts, they’re getting the best experience irrespective of what else they have. They’re not going to be losing anything by buying one non-Intel part. So if our goal is to make sure that our products work the best, no matter what environment there is.

Gadgets 360: Why are the E-cores on the 13th Gen still Gracemont? What has prevented Intel from doing anything different on that side?

Gokul V Subramaniam: We picked the core design that’s needed to meet our performance goals, so for us to be able to deliver what the enthusiast segment needs, we’ve made the decision.

Is there a different development cadence then? Is there not going to be a yearly E-core architecture refresh?

Gokul V Subramaniam: I can’t answer that, it’s a future product question. We do have a roadmap for our various core designs but that’s not something I can share today.

Intel Communications: We’ve talked about Meteor Lake and Arrow lake at a high level but we’ve not talked about the core structure that goes into them.

Some responses have been condensed and slightly edited for clarity.

Disclosure: Intel sponsored the correspondent’s flights for the event in New Delhi.