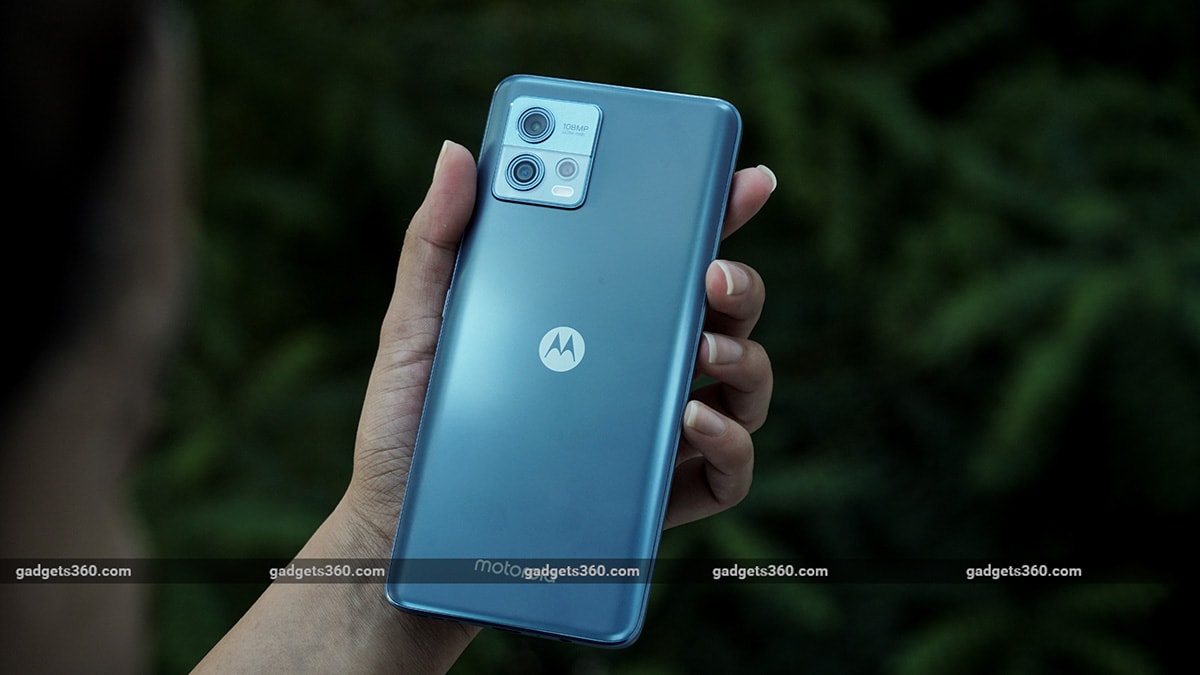 Motorola has been one of the most active smartphone brands in India, in 2022. The company has launched several phones in its budget and mid-range G series and the premium Edge series in India. Most Motorola smartphones today, priced above Rs. 15,000, offer 5G support and it totally makes sense as 5G has officially launched in India and telcos are working on a nationwide rollout as you read this. Meanwhile, an odd phone in Motorola’s portfolio of devices under Rs. 20,000 is the recently launched Moto G72. The phone does pack premium hardware for the price but lacks 5G support. In comparison, other Motorola phones launched recently in India around this price do support 5G.

The Moto G72 offers a MediaTek Helio G99 SoC, which is also found in the likes of the Poco M5, Redmi Pad (Review), and the Redmi 11 Prime. The phone also features a 120Hz AMOLED display, a 108-megapixel triple-camera setup and a beefy 5000mAh battery. With the kind of hardware on offer, should you consider buying the Moto G72? Here is our full review to help you decide.

Motorola has launched the Moto G72 in India in a single storage configuration. The phone packs 6GB of LPDD4X RAM and 128GB of uMCP storage. It is priced at Rs. 18,999 and can be purchased via Flipkart.

The Moto G72 is available in two colours — Meteorite Grey and Polar Blue, which is the one we have. I usually prefer phones which have dark colours such as any shade of black, and with a matte finish. The Moto G72 is one of the exceptions for me as I really like the Polar Blue colour, which has a shiny texture on top of the matte finish. Motorola calls it a PMMA acrylic glass-finish design and although the back is still made of polycarbonate, the colour scheme itself makes the phone look a lot premium.

The Moto G72 also feels very good to hold in the hand. It is fairly light at 166g and measures just 7.9mm in thickness. The weight distribution is also quite good and the curved corners make it a lot easier to hold the phone.

The camera module design on the Moto G72 is similar to the more premium Moto Edge 30 Fusion (Review). You get a square-shaped module which houses three camera sensors on the back. The LED flash is also located inside this module.

At the bottom, there is the USB Type-C port sandwiched between the 3.5mm headphone jack and the primary speaker grille. The dual-SIM slot is on the left, whereas the power and volume buttons are on the right side of the phone.

The front of the Moto G72 houses a flat 6.55-inch pOLED display with a full-HD+ resolution. The 120Hz screen supports up to a billion colours and comes with an HDR10+ certification. However, some apps such as Netflix wasn’t able to detect this capability, so it couldn’t stream HDR content. The display produces good details and colours even when you are consuming full-HD OTT content. It also has a peak brightness of 1300 nits, which makes the phone ideal to use even in outdoor lighting, during the day. The Moto G72 can be used even when there is a slight drizzle outdoors as the phone offers an IP52 rating for splash resistance.

Moto G72 sports a fairly thin chin at the bottom

The bezels around the display are also fairly thin, including the chin at the bottom. The Moto G72 also features an in-display fingerprint scanner, which is quick to authenticate fingerprints and unlock the device. This feature is a nice bonus, as not many phones in this price range offer it. That being said, I would have liked it if it was positioned better under the display as I found it to be too low down.

The Moto G72 is powered by a MediaTek Helio G99 SoC, which is among the few new 4G SoCs launched in 2022. The SoC is based on a 6nm process and comes with performance upgrades over the Helio G96. The G72 also packs a 5000mAh battery with support for 33W fast charging. While the battery size is not an issue, some phones such as the Redmi Note 11 Pro offer quicker 67W fast charging for the same price. Connectivity-wise, the Moto G72 supports Wi-Fi ac (2.4GHz and 5GHz), GPS, Bluetooth 5.1, and the usual suite of sensors.

The phone runs on the Android 12-based MyUX skin from Motorola. While your choice could vary, I personally like MyUX as it offers a good mix of clean, near-stock Android experience along with a bunch of customisation options. The Moto app is a one-stop destination to check all the personalisation options available. You can not only customise the fonts and icons, but also the system UI colours based on the wallpaper.

Like most Motorola phones, the Moto G72 also supports Moto gestures such as twisting your wrist twice to open the camera, three-finger screenshot, flipping the phone to enable the Do Not Disturb mode, etc.

The software experience on the Moto G72 was pretty good but there were some instances where apps crashed or froze, especially the default camera app. Motorola has also promised to provide the Android 13 update along with support for security patches for up to three years.

The MediaTek Helio G99 SoC in the Moto G72 is quite capable of handling basic, day-to-day tasks and casual gaming. We played games such as Call of Duty: Mobile and Asphalt 9 Legends along with lighter but popular games such as Subway Surfer. Call of Duty: Mobile averaged around 40fps with ‘Medium’ graphics and ‘High’ frame rate settings. The game’s battle royale mode worked smoothly on most occasions but there were minor stutters here and there. Asphalt 9 Legends was also quite fun to play on the phone and there was no sign of any lag.

In the AnTuTu benchmark test, the Moto G72 scored 3,34,803 points. While the score was lower than the more affordable iQoo Z6 Lite 5G (Review), most users should not notice any major performance differences with regular use on a day-to-day basis. The Moto G72 scored 533 and 1736 points in Geekbench’s single-core and multi-core tests, respectively.

The dual speakers on the Moto G72 come with Dolby Atmos enhancement. While the speakers are loud, the earpiece (which doubles as a secondary outlet for audio) produces a much lower sound output compared to the primary speaker.

Battery life is also pretty good. Based on my use case, which included social media scrolling, playing games, filming content, etc., the Moto G72 offered about nine hours of screen-on time (SoT) on average. In our battery loop test, the G72 lasted for 14 hours and 10 minutes. You get a 33W fast charging adapter in the box, which takes about 1 hour and 40 minutes to charge the phone from zero to 100 percent.

The Moto G72 features a triple-camera setup on the back. There is a 108-megapixel Samsung HM6 primary camera along with an 8-megapixel ultra-wide camera and a 2-megapixel macro camera. For selfies, the phone has a 16-megapixel camera on the front.

The main camera produces good details but the reds and blues look slightly oversaturated. The dynamic range performance is also quite good on this one. In low light, the main camera manages to bring out fairly good details in the shadows when using Night mode. There is noise and some artificial smoothening to curb that, but I would not expect anything better from a mainstream smartphone. The highlights are also not overblown, which is very good to see.

I cannot say the same about the ultra-wide camera though as the colour temperature is slightly different compared to the main camera. The details are also not on par and there is some distortion around the corners. I also noticed some colour-fringing in some shots. It took me some time to get used to the focal length of the macro camera but once I got the hang of it, the sensor produced fairly okay images. I would rather recommend using the ‘Ultra-res’ mode in the ‘More’ menu of the camera app and then crop the image further to get similar results.

The Moto G72 does a good job with selfies. The skin tone is close to natural but the software tends to smoothen textures a bit. There is also a hint of pink hue in skin tones, which we also experienced in the Moto Edge 30 Fusion. Although, the pink cast is not as significant in the selfies taken with the Moto G72.

The phone supports 1080p video recording at 60fps using the main rear camera. If you wish to vlog using the front camera, you must know that the video recording is capped at 1080p and 30 fps. While the camera produces good colours, the footage feels a bit shaky due to the lack of optical image stabilisation. The dynamic range performance is also quite average. In low light, there is noticeable noise in the darker areas but the primary camera captures fairly well-exposed footage.

The Moto G72 offers everything that one would want to have in a smartphone under Rs. 20,000. The phone offers a good multimedia experience, decent camera performance, and a processor that can also handle casual gaming. Battery life is not disappointing either as it can last for a full day with medium to light usage. On top of all this, there is the near-stock Android 12 goodness with a touch of customisation in the form of MyUX. Design preferences are subjective but if you ask me, I think the Moto G72 looks quite good.

That being said, the phone comes with a huge asterisk — lack of 5G support. The Moto G72 is the only phone in the company’s portfolio of phones priced above Rs. 15,000 to not offer 5G network support. Those who want 5G support will obviously have to look at something like the Moto G82 5G (Review) for a couple of thousand rupees more. The latter offers better performance, the same multimedia experience, and all-day battery life while staying future-proof with 5G network support.

Alternatively, if you want a no-compromise budget smartphone and don’t want to jump on the 5G bandwagon, then the Moto G72 could certainly be considered. If near-stock Android experience is not your priority and you want to consider other options, you can check the OnePlus Nord CE 2 Lite 5G (Review) or even the Redmi Note 11 Pro+ 5G (Review).